In 1960, the beaches of Spain were recreated at Bamburgh during filming. Only one shot features the castle Bamburgh Castle in the background before the final fight. The rest of the castle scenes towards the end of the film are featured at Spain’s Belmonte Castle. 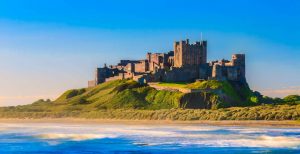