In the opening episode of season 9 of Columbo, a police detective meets a famous artist whose lust for life apparently has been deadly. Much of the episode takes place on the beaches of California as a place where Louise spends much of her time.

Specifically, the infamous beaches of Santa Monica and Malibu were used for filming scenes with Louise. Paradise Cove in Malibu serves as the setting where Louise’s body is recovered. 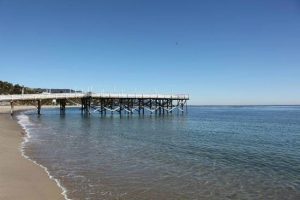