Canal+ period-piece Versailles was a French historical fictional show that centered around the reign of Louis XIV and the construction of infamous French palace, Versailles.

Opulent and elaborate, the show was filmed across a series of locations in France, specifically in the Île de France region. What may (or may not) surprise viewers of Versailles is that most of the filming does not take part the actual palace.

As one of the most recognizable of Versailles filming locations, the grand mansion Vaux-le-Vicomte often stands in for the actual Versailles Palace. Louis XIV himself was taken aback by the French Château’s beauty and was inspired to construct his infamous palace.

In the Versailles TV series, beautiful country house Sceaux is used as a stand-in for Versailles during the construction scenes. The gardens are also featured extensively.

One of the more prominent Versailles filming locations can be found only thirty minutes away from the centre of Paris. The Château de Maisons was constructed during the 17th-century and is located North West of Paris. The lavish grand ballrooms were used for party scenes. Elsewhere in the property, the beautifully proportioned grand staircase is also featured in several scenes.

Lastly, the palace of Versailles itself. While many scenes of the series were not filmed at Versailles, it is worth noting that plenty of the series was still shot there. Bedrooms, staterooms, and the lucious gardens, were all used for many scenes. The infamous Hall of Mirrors was also used for filming, as was the Grand Canal and the ornate main entrance, famous for its golden gates. 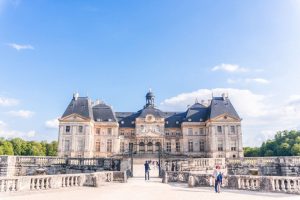