Romance musical remake A Star is Born from 1976 quickly gained a cult following during its original release. Its success propelled an even more successful 2018 Oscar-nominated remake.

John and Esther, played by Kris Kristofferson and Barbara Streisand, are star-crossed lovers who spark a relationship and eventually move to the desert together. They built a brand new honeymoon hideaway in an adobe house.

The house is located on private land closed to the public in Empire Ranch, Sonoita, Arizona. Sonoita, Arizona is located at the junction of State Highways 82/83 in the southeastern part of the state. This is appromiately 25 miles from the Mexican border. 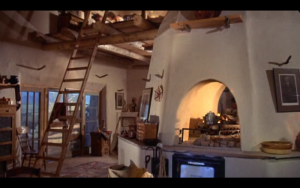