Crime film Thelma & Louise is known for its wild stunts and crazy action sequences. Perhaps one of the most notable scenes in the film is the final Grand Canyon scene at the end. The two main heroines  drive off the precipice during their mad dash from the law, then fall to their deaths. The ending to Ridley Scott’s Thelma & Louise had quickly become a classic. Not many films end in such a dramatic twist, thus making the film widely known.

The scene, which is meant to take place in the Grand Canyon, Arizona, was actually filmed near Moab, Utah in Dead Horse Point State Park (State Route 313, Moab, UT). 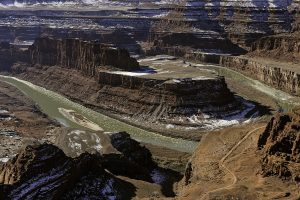