Star Wars Episode IV: A New Hope has become one of the most beloved and iconic films of all time since its realease in 1977. Since then, George Lucas and his team fabricated an entirely original cinematic universe. It quickly became one of the highest grossing media franchises of all time.

Besides filming at a traditional studio, Lucas and his team took the filming for A New Hope across the world to provide the settings for alien planets in the Star Wars Universe.

One of the first alien planets we come across is the desert planet of Tatooine. This is home of protaganist Luke Skywalker. The real life setting of Tatooine is Tunisia. Matmata, Tunisia serves as the setting for the courtyard shots and the Lars dinner scene. Chott el Djerid, Tunisia was used for more of the Tatooine desert and the Lars home. Also, La Grande Dune served as the landing area of the escape pod of C-3PO and R2-D2. Ajim provides exterior shots of Mos Eisley canitna and Obi-Wan’s home, and Shubiel Gorge is the Tatooine canyon.

Death Valley National Park in California serves as the backdrop for more Tatooine scenes.  This includes the scene where R2-D2 serparated from C-3PO and then abducted by Jawas (spliced with footage shot in Tunisia) and where the Tusken Raiders mount Bantha.

Next, for Yavin 4, Tikal in Guatemala is used for panoramic shots over the moon’s jungle and Massassi Temple. We can also see Cardington Airfield in Bedfordshire, England used for Rebel Base hangar scenes inside the Massassi Temple. 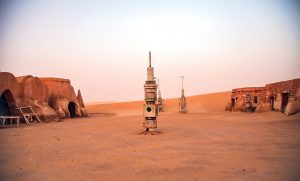